How KFC turned a delivery crisis into a PR masterclass

I’m sure by now you’ve heard about the Great British Chicken Shortage and how the good people of the United Kingdom were deprived of that infamous secret blend of eleven herbs and spices… for a week or so at least.

On February 19, KFC announced that it had shut more than half of its 900 UK restaurants after problems with delivery caused the fast-food chain to run out of chicken…and the internet basked in the misfortune.

The initial response and reaction

After a banquet of memes, viral tweets and the woman who “’ad to go to Burger King!” snowballed across the web, KFC’s marketing managers knew they had to respond and a comeback operation was launched.

Riding on the initial public outcry, KFC did a great job in controlling the message and used various online and offline channels to not only apologise for the cock-up, but to keep the public well informed on how they were attempting to fix the issue. This included full page ads in all the national newspapers (as shown below) and these images sparked a wave of positive responses from the public.

The brand also took to social media to engage in some lighthearted repartee with its customers. KFC’s Facebook and Twitter feeds became populated with the latest information and were constantly filled with updates including the whereabouts of its chicken deliveries. This not only kept its customers informed but also quashed any rumours flying around about the brand being in turmoil.

The social media accounts also published regular Q&A content in a creative way, confirming information posted by the media. Then use of language like “gossip in the hen house” kept the tone playful and in keeping with KFC’s younger target audience, but it was also clear and informative. 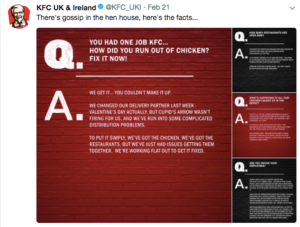 Jumping on an empty bandwagon

KFC’s response across social media was a masterclass, but perhaps it was an opportunity missed for some of its competitors. There was little in the way of rivals hijacking the story to steal the limelight (where were you Nando’s?!) and if it wasn’t for Iceland coming in to save the day with some classic brand-to-brand banter, we would have been super disappointed. Here’s what the frozen food giant had to say: 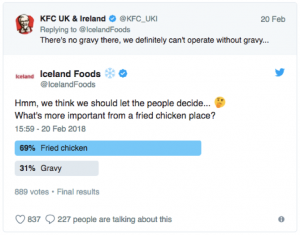 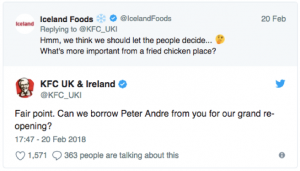 Even This Morning ran a piece on how to make your own home-made bargain bucket yet from McDonald’s, there wasn’t a Chicken Legend mention in sight.


‘We Always Want What We Can’t Have!’

Although quiet on the competitor front, the breaking news of KFC running out of chicken caused a huge surge in public searches for “KFC near me”, with the largest search peaking on 19th February according to Google Trends data (this was closely followed by hungover New Year’s Eve party-goers clearly looking for a chicken-fix on January 1)

The story put finger licking chicken at the front of mind for consumers, with many searching online for their nearest fix. KFC took that on board and responded beautifully…

Reacting to this, KFC made great use of Twitter’s automated message system and launched #WheresMyChicken. Kentucky-fried lovers could simply private message the brand’s Twitter account and, using geo-location, Twitter would find the nearest KFC outlet and send directions. The tone was fun again with users encouraged to easily share the results (cleverly expanding the reach of the campaign and a simple but absolutely genius idea from KFC helped to drive customers back into its restaurants. 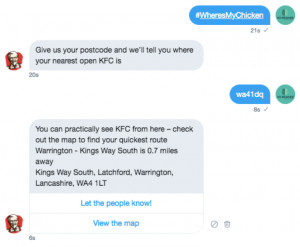 The hashtag also became the main hub for information, updates and the odd hilarious meme. In the first couple of days, the hashtag created 586,399 impressions on Twitter alone along with top related hashtags #nopatty #gutted and #settlingforfish. Interestingly, while 40 million more women visit Twitter than men each month, it was the guys who topped the use of the hashtag with 62% of men on Twitter engaging with the campaign. Men really do love their fried chicken!

The latest – “We’ve got the chicken but BYO gravy”

Just as we’d got to the bottom of our Bargain Bucket and thought the crisis was over, KFC announced that its restaurants had run out of gravy! Again, this was put down to delivery issues (probably with a large helping from the weather and the Beast from the East) and meant that most KFC restaurants were serving a ‘reduced menu’ in the days that followed.

Conspiracy theorists (and more than a few cynical PR practitioners) argued that the brand was milking the product shortage story for all that it was worth, but the media continued to lap it up and KFC remained one of the most talked about brands on the internet over a fortnight after the crisis first came to light.

Job done? Well, it remains to be seen. Some media outlets were reporting that KFC was losing up to a £1million a day when the vast majority of its restaurants were shut. That’s a big shortfall to make up, but given the perfectly executed response, it doesn’t seem as if the KFC brand will see any long-term reputational damage. If anything, it’s much more likely they’ll see a rise in demand so we’ll be watching with interest to see what comes next in the saga!

The KFC marketing team deserve a lot of credit for their response because they were honest, relatable, calm, and kept the public well informed throughout the issue. All the key elements of a successful crisis communications response.