More rules and regs for influencers announced, but is it all a bit too much?

Home » Blog » More rules and regs for influencers announced, but is it all a bit too much?

The world of Instagram and YouTube is an industry that has been taking over how we consume products for the past ten years. And one that’s not about to slow down any time soon.

Influencers are no longer the “girl next door” who’s “just like us”. They’re running multi-million-pound empires and have huge TEAMS of people working for them. And an industry with such growing influence over us needs some kind of policing to keep things in check.

The Competition Markets Authority (CMA) and Advertising Standards Authority (ASA) have made multiple attempts to protect consumers from misleading and ambiguous posts across social media.

However, as more and more regulations and laws come into effect for influencers and bloggers, some state that they’re simply not clear enough. Guidelines from the CMA state that content should be “transparent, easy to understand, unambiguous, timely and prominent” and “apparent without the need for people to click for more information, no matter what type of device they’re using to view the post”.

But is the CMA guilty of not being clear enough?

See what you think of the latest set of rules;

In the past influencers were required to disclose a paid partnership with a brand but these new guidelines state that any form of compensation (i.e. moneys, gifts, clothes, services) must be clearly disclosed.

Because of their high following, influencers receive goods from brands in the hope they’ll feature them on their channels and under these new guidelines, if it’s not been bought, it has to be made clear.

Sometimes influencers have access to discount codes and run competitions and giveaways alongside a brand in order to gain followers for themselves and brand exposure for the company.

Under these new rules, influencers must be completely clear about their relationship with brands (even if it’s a past relationship) and clearly state when and how they’ve worked/are working with the brand in question.

It’s no secret that influencers have been caught misleading their followers by implying they’ve bought a product or service they are endorsing when it has been gifted or loaned.

New laws are cracking down on all misleading posts and some influencers have taken these new laws incredibly seriously.

(Clearly states “AD” at the start of the post and details which products featured in the image have been gifted at the bottom of the post.)

(Brand partnership has not been clearly stated). 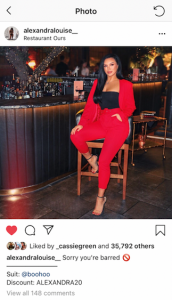 The new laws have seen a whole host of influencers taking to social media to discuss the new rules asking for clarification amongst themselves. Consumers and viewers have also taken to the channels to air their gripes: 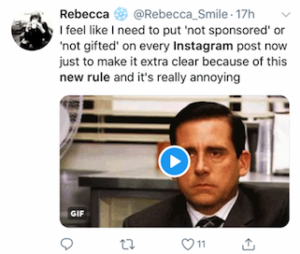 So, as a governing body for the industry, is the ASA guilty of not adhering to one of its own rules by simply not being clear enough? Are the rules ruining what Instagram used to be? And are these new rules simply not clear enough to be taken seriously?

Let us know what you think! twitter.com/nobraineragency.