Wimbledon over the years: brands serve up their best stunt ideas

Home » Blog » Wimbledon over the years: brands serve up their best stunt ideas

With the nation’s favourite tennis competition starting today, the competition for brand exposure is hot. We’ve taken a look back at some of our favourite campaigns and stunts over the last few years.

Brands who’ve had ‘balls’ over the years

We thought it would be interesting to delve deeper into some of these well-received or even controversial Wimbledon campaigns. Whether funny, thought-provoking or passionate, over the years there has been some incredible stunts and ideas, and below we’re sharing the ones we ‘love’ with you!

To start off, our favourite campaign of 2015 was Robinsons’ Great Ball Hunt: a nation-wide treasure hunt. To celebrate its 80-year partnership with Wimbledon, the company hid 8 giant tennis balls around the country, inviting the public to follow daily clues given by tennis legend Tim Henman. Once found, the public had to tweet a photo of the ball to Robinsons, to be in with the chance of winning a VIP day at Wimbledon.


We loved this campaign because it used the idea of competition to create online traction for both Wimbledon and Robinsons – plus it gave people the opportunity to go the world-renowned event!

2015, however, also presented one of the greatest stunts we have seen at Wimbledon: Bathstore’s QLoos. The portaloo offered a stress-free option for those bursting for the loo, but stuck in the infamous Wimbledon queues. 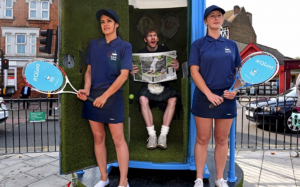 With an AstroTurf interior, tennis memorabilia, live commentary of the games and even a strawberries and cream fragrance, the toilet was built in true Wimbledon style. It even came with its own ball boys and girls to guard peoples’ spots in the queue whilst they used it!

At No Brainer we love this idea! It combines comedy, style, class and, most importantly, tennis(!) to provide an amazing advertisement for both Bathstore and the competition.

Our favourite 2016 Wimbledon ad brings a more comic element into the mix, with Andy Murray going head to head with Jaguar in a twist on the classic tennis match. The match tests the speed of Murray’s serve against the acceleration of Jaguar cars, allowing the company to display their latest cars.

Jaguar’s ad takes the top spot for 2016 as they don’t even let Andy Murray win the game, despite him being 2013 Wimbledon champion! They even have the cheek to end the video with “Better luck at Wimbledon, Andy…” A humorous way to advertise Jaguar’s new cars and Wimbledon itself.

The ad we have chosen for 2017 is not necessarily our favourite, but it is the most interesting of the lot. Paddy Powers’ controversial Wimbledon publicity stunt involved drawing a tennis racket on the Cerne Abbas Giant, a 400-year-old symbol of fertility, following the announcement that Andy Murray was expecting his second child. The stunt, however, received backlash as some argued that the company had gone too far in defacing a National Trust site. 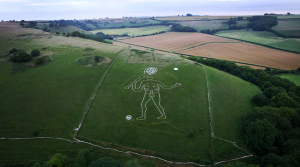 For us at No Brainer, the ad presents the age-old question: is all publicity good publicity? Although the advertisement has been widely criticised, it has also made headlines across the country – increasing Paddy Power’s reach to the public.

So, although controversial, the stunt made the company the talking point of many British households – which makes us ask ourselves: was it powerful or damaging advertising?

Our favourite campaign from last year’s Wimbledon, commissioned by the All England Club, celebrated and honoured the 150th anniversary of the club and 50 years of Open tennis. The animation shows the evolution of Wimbledon: from its beginnings, in 1877, with smartly dressed players and few spectators, up to the present day, showing tennis legends surrounded by tens of thousands of people.

The #TakeOnHistory campaign takes the top spot for 2018 because it shows how Wimbledon still embodies the same values; strength, camaraderie and sportsmanship; even after 150 years of change and improvement. Additionally, its use of video to create a sense of ‘Britishness’ and community amongst viewers is a testament to the amazing Wimbledon branding.

So there you have it – our favourite ad campaigns of the last few years.

With Wimbledon starting today, here at No Brainer we are not only extremely excited to see the spectacular tennis matches, but also to see the variety of ad campaigns produced this year!