How is the UK government tackling the spread of fake news?

Home » Blog » How is the UK government tackling the spread of fake news?

In some ways, it’s never been more important to stay informed – our wellbeing counts on it.

However, as the coronavirus crisis continues to unfold and spread across the world, so do many fake news stories.

Throughout history, we’ve seen time and time again that as confusion and speculation spreads, inevitably so does misinformation – and there’s a lot of confusion in the world right now. But are the major players in social media doing enough to tackle it?

The impact of fake news

The director-general of the World Health Organisation (WHO), Tedros Adhanom Ghebreyesus said it perfectly when he said: “We’re not just fighting an epidemic; we’re fighting an infodemic.”

With the help of the internet – and more specifically social media – what were once just whispers and rumours are now being presented as facts.

From reports that the government is monitoring how often we leave the house under lockdown, to curing coronavirus with water and protecting yourself by eating garlic – there’s a never-ending list of misleading information. You only need to scroll through your Facebook, Twitter or Instagram feed and you’ll come across a handful of fake posts, like these: 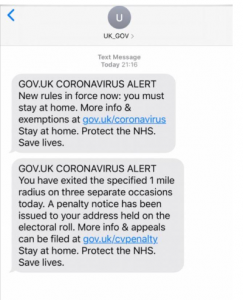 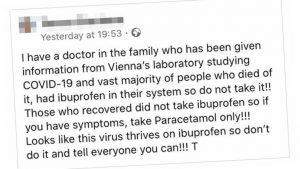 Current measures being put into place

With misinformation flooding our feeds, it’s becoming increasingly difficult for all of us to identify what information is true and for businesses it has become even more difficult to protect their brands reputation. Incorrect, dangerous and irresponsible information is spreading faster than ever before and is having destructive impacts across our society.

The government has announced a new “counter-disinformation unit” headed up by the Department for Digital, Culture, Media and Sport and will work alongside social brands to clamp down on false information on the virus.

Additional to this, the NHS announced a partnership with Google, Twitter and Instagram to help stop the spread of false information. The new “package of measures” includes targeted promotional ads that include correct NHS travel and health advice. These are targeted to people using search terms like “coronavirus treatments” and “coronavirus symptoms”.

The social giants are also working on giving verification (a blue tick) to more 800 NHS accounts, and we’ve already seen lots of official pop-ups on COVID-19 related advice as we’re scrolling through our social channels. For example, Tik Tok now has a consistent COVID-19 banner at the bottom of its platform which sends users to a host of influential and topical accounts sharing accurate advice and guidance.

Instant messaging giant, WhatsApp has also taken an incredibly innovative approach to tackling the problem and is now working with the government on a new automated chatbot which provides factual information to users, reducing the strain on the NHS. It has also pledged to limit the amount of times a message can be forwarded and is now using machine learning to ban accounts that are sending messages in mass.

From these new measures being put in place, it’s clear that social media is the backbone to the spread of so much false information. But with word-of-mouth being such a huge factor in behaviour change, paired with the power to be influenced by the people around us, what will the UK government do next to halt the spread of fake information, and what can businesses do to shield their own brand?

Protecting your own brand

We live in a viral world where information can spread at the click of a button. The impact that can have on the public’s perception of your business can be negatively influenced by just one false accusation. People jump to conclusions, share incorrect news and before you know it that misinformation has spread.

The current pandemic has induced more fake news than ever before and has really illustrated how important brand reputation management has become – proving just how crucial PR is during uncertain times.

Having a strong crisis management plan is vital in mitigating the impact that fake news can have.  This includes having the ability to regularly monitor your brands reputation and be proactive in your response to the spread of inaccurate information, whether that be on social or in the media. This is something I know our clients see a great deal of value in.

Although eventually this pandemic will pass, the need for a strong crisis management plan will remain and having this in place will ensure your prepared for any crisis that may occur in the future.

What is our role in this?

The Edelman Trust Barometer recently reported that nearly seven in 10 respondents among the general population worried about fake news or false information being used as a weapon to spread distrust. How then, as PR professionals, can we support clients through this era of mistrust?

Our role is to tell a brands’ story, to create a connection with the audience in order to inspire trust. The importance of creating brand trust has never been greater amidst the phenomenon of fake news and especially during this pandemic. It’s vital that we’re able to support our clients in sharing much-needed expert information at this time.

Quality content can be a powerful tool and can be used to amplify your organisations key messages. Prove to your audience that you are an authority in your industry by providing reliable, insightful information on a regular basis.

It’s clear that the scale of fake news and its effects have led to some of the biggest online and social media companies putting measures in place to slow the spread of fake articles.

However, the rapid rate in which false news is being created, means it’s almost impossible to keep up with, and reports from the UK’s Department of Culture, Media and Sport show that up to 70 fake news incidents a week are doing the rounds on the internet.

Although the war against fake news continues, that doesn’t mean that your brand will lose the battle. I’m incredibly proud that as PR professionals, we’re able to play a pivotal role in supporting brands in telling their truth.